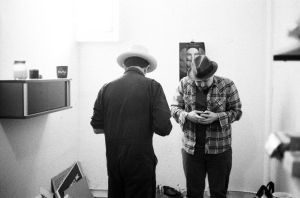 Carlos Grasso and James Slay of Dumfuxx in downtown Los Angeles at The Brewery Arts Colony, 2011. They seem to be engaging in some sort of pagan prayer to the gods that the rehearsal won’t end up in abject malaise. Photo by Eric Gorfain of The Section Quartet with his vintage Leica film camera.