How Bromo Lizarraga discovered DNA.
It is little known that thirty-two years before scientists James Watson and Francis Crick announced their discovery of the DNA double-helix in 1953, a mute, self-taught geneticist, Bromo Lizarraga, actually discovered the blueprint of life first. Born in Oyarzun, Spain, the devoutly religious sixty-three year old Basque mule farmer accomplished this astonishing feat with a primitive sound recording he made in his barn using a single strand of fine hair from his beloved wife’s head as a microphone. He had discovered her hair was extremely sensitive to the most minute vibrations. Bromo had seen her hair dance like a color organ to Basque folk music, whip in to a frenzy when two men were fighting in the street and undulate like a ballerina to classical pieces, particularly adagios, specifically Samuel Barber. Her follicles also served as a weather forecaster causing her coif to take the shape of what ever storm front was approaching. This sensitivity to nature was not lost on Bromo. To create the microphone he ingeniously split one of her strands of hair into one, one-hundredth of its original width using a microscopic sliver of pond ice. The hair was then shock-mounted between the removed feelers of a cockroach and attached to a thin wire connected to a half-full wine barrel used as a sound amplifier, a primitive pre-amp, if you will, to boost the sensitivity of the hair microphone. He then carefully inserted the microscopically thin hair into a single cell extracted from his mule Gordo. The tiny wire attached to the hair transferred the vibrations via the wine barrel to a home-made clay disc recorder he invented. Bromo only managed to get a minute of sound but it was enough to prove he was on to something spectacular. Meticulously dissecting the mysterious sounds, he isolated a particular block of noises and surmised that it was the calling card to the key of life. Enervated by this spiritual-scientific vision he then used this sonic imprint, this audio Shroud of Turin as the transference mechanism to visually realize an image of the now familiar twisted strand of proteins (see drawing on the cover art). The resemblance to current models of DNA is shocking. He called his discovery, ‘The Tiny Ladder Of Dreams’. 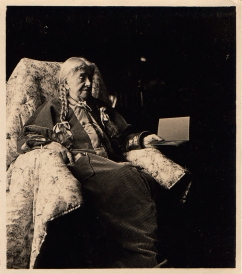 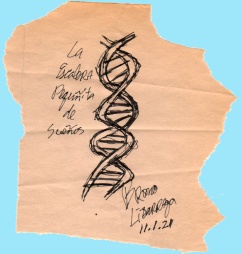 Sketch of a DNA double-helix by Bromo Lizarraga, Spain, 1921. 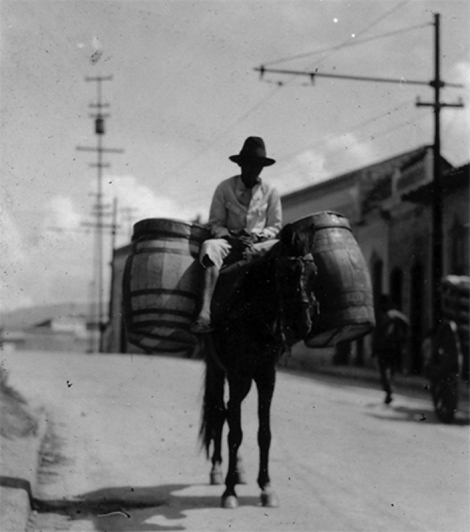 Bromo Lizarraga on his mule, Gordo.

He was truly a man ahead of his time. Taking his experimentation further in 1922, albeit inspired by a way to cheaply expand his mule herd, Bromo imagined a cellular duplicating technique now known as cloning but which he called zeroxi. He then set upon making an exact copy of his prized stud mule, Gordo. Using a bacalao (fish)-based concoction brewed by his wife Maricela he managed to induce the cell to self-duplicate by playing back the sounds of DNA replication he had recorded earlier – the chemistry of which is still a mystery and unmatched for sheer scientific hubris. He promptly recorded this activity using the aforementioned technique. Unfortunately he was not able to get the cell to develop into a zygote. The minute and four second recording is all that exists of this earliest known cloning attempt. It was rumored he eventually wanted to clone himself and his wife so their love could last forever.

Bromo fanatically believed that sound, especially tiny sounds, was the portal to the secrets of life, happiness and spiritual fulfillment. He invented and built incredibly sensitive recording devices to capture the sounds around him. Sadly none of the original devices exist. Bromo died in 1932 when he was hit by a runaway fruit cart at the Festival Of Maneques as he was recording the sound of ennui, a microphone clutched in his hand. At the time of his death he had just begun to extract what he believed was the voice of Jesus Christ from a rock he had collected on a trip to the Holy Land. He invented a latent sonic imaging technique for this exact purpose. Those experiments have yet to be processed and cataloged.

The discovery of these seminal recordings and documents were made by musician and filmmaker Carlos F. Grasso, a distant relative of Bromo, on a family roots expedition to the Basque region of Spain in 2000. The original recordings, etched onto homemade 116 rpm clay platters, plus drawings and notes, were found buried in a field behind what is now a Nike factory. Mr. Grasso meticulously transferred the fragile discs to digital format. A feature length documentary on this extraordinary man is in the works. May Bromo’s memory and accomplishments live forever.